Former St Thomas Parish Office Manager of the Rural Agricultural Development Authority (RADA), Caswell Glover, is enjoying a successful retirement, thanks to his investments in a farming business.

Glover, owner of G-Lovers Orchard in Rozelle, St Thomas, has used seven of his eight acres of farmland to grow a variety of fruit crops, which he harvests, processes, packs and sells.

The Pear Tree River resident told JIS News that the idea to start a business came from his travels abroad during his tenure as director of RADA.

Overseas, Glover observed that operations, like the one he currently owns, were in abundance.

“When I came back from countries like Vietnam, every group of farmers I met, I tried to sell the idea of ​​having value-added production as a kind of marketing strategy,” he said. -he explains.

Upon his retirement in 2013, the trained agronomist took his own advice and started his business with the help of family members and several workers from his community.

“The response has been tremendous. I do quite a few festivals, exhibitions and farmers’ markets, and in all these public forums my products are sold,” he said.

Glover’s specialties include pairing breadfruit or plantain chips with red herring or salt fish, which have become popular in convenience stores, supermarkets, gas stations and schools in St Thomas. .

“Originally intended as bar snacks, but (they have) taken off beyond the bar. Breadfruit crisps, in particular, are popular at Morant Bay Secondary School” , did he declare.

Prior to his good fortune as an entrepreneur, Glover said like many other local farmers, he had experienced several challenges including vandalism and predial theft.

Predial theft, defined as the theft of agricultural produce, is estimated to cost Jamaican farmers around $6 billion a year.

Agriculture and Fisheries Minister Pearnel Charles Jr, who spoke at a recent predial flight workshop, said: “This is perhaps the biggest challenge we have in expanding our agricultural sector and to attract more investment so that we can truly be food secure and have food for all (of) Jamaica and for the region.

Glover, through his farming business, has taken steps to counter the “extremely high” level of predial theft to which he is exposed, so that he can play his part in contributing to national food security.

For example, he harvests his crops at different stages of their growth and prepares them for processing before they can be harvested by thieves when they reach maturity.

In addition, he grows different varieties of trees, such as the Ma’afala breadfruit, which grows quickly, but significantly smaller than most types of crops in Jamaica.

Due to the tree’s appearance, thieves are not easily attracted to it, which is great news for Glover, as “the Ma’afala is actually perfect for transformation.”

Another tactic the dedicated farmer uses to ensure the viability of his farming business is to grow a wide range of produce from each fruit and maximize his harvests before vandals or thieves wreak havoc.

“Take, for example, coconuts…there are a number of products I get from a single fruit. I make a jelly water, coconut wine, coconut drops, gizzadas and coconut oil,” he said.

Glover said the same principle is applied to many other fruits he grows, such as plantains and bananas. 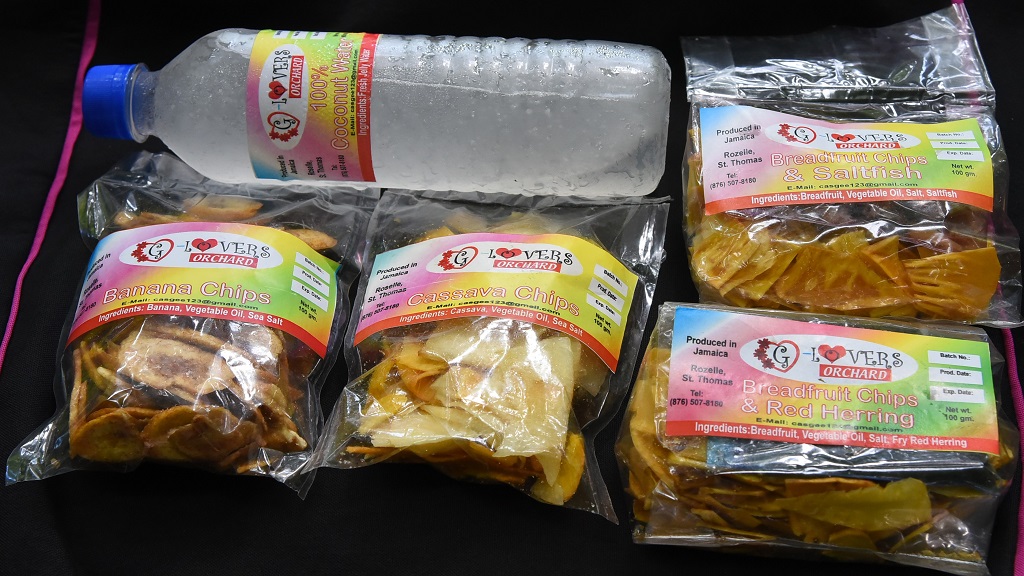 G-Lovers Orchard in St Thomas makes a wide range of products, including its signature breadfruit chips and salt fish or red herring.

“If I depended on selling fresh produce to merchants and exporters, I wouldn’t survive,” he said, adding that “if I didn’t do some processing, I might have given up the closed a long time ago. I use this lean production as a marketing strategy.

He is grateful that his products reach overseas as well, with visitors looking to bring a sample of Jamaica back home, being among his main customers.

The passionate entrepreneur, who spent 38 years with the Department of Agriculture, sees a bright future for his business and has an active social media presence, primarily using Facebook and Instagram to post and promote his products. 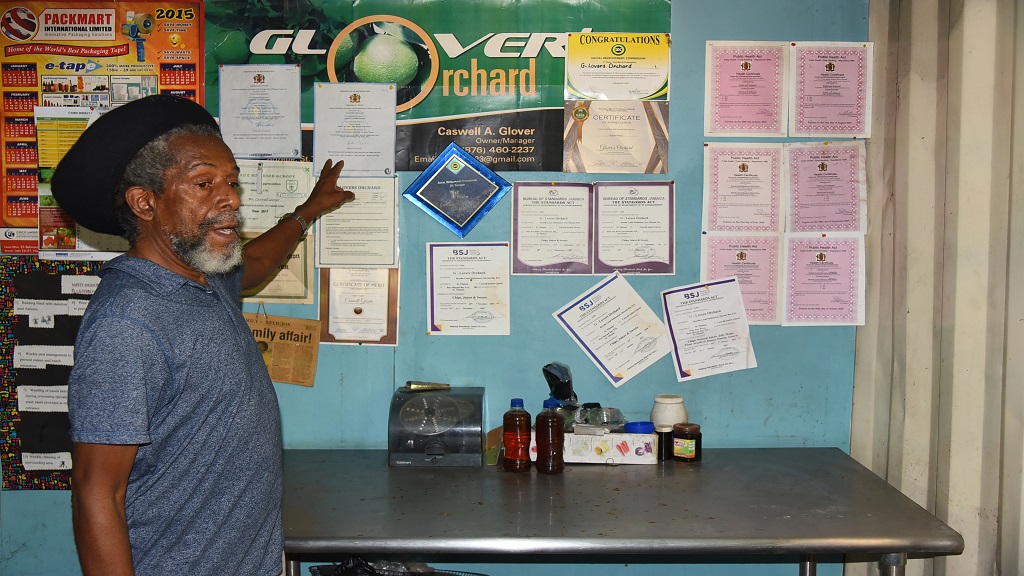 The owner of G-Lovers Orchard in St Thomas, Caswell Glover, points to his agriculture certifications and accolades, which he says ensure his farming operations are of a high standard.

Glover recounted his encouragement, years ago, of local farmers to take a business approach to farming.

While expressing concern that “I can’t identify anyone who has taken up the challenge”, he nevertheless continues to “talk to people along these lines and try to encourage them to see the benefits of this approach to farming”.