US stock markets were hot. Hot red. The S&P 500 has posted four straight “up” weeks and closed on Friday at the gate of its own 200-day SMA. The Nasdaq Composite and the Russell 2000 also posted their fourth consecutive “green” weekly candlestick.

In the case of the Russell 2000, this small-cap-focused index actually managed to capture its 200-day line on Friday afternoon. The Philadelphia Semiconductor Index, which I focus on a lot in this column, has now assembled six consecutive winning weeks but still needs to add 7.2% to reach its individual 200-day SMA.

Stock index futures traders pressured U.S. markets overnight in response to alarming Chinese economic data that sparked a policy response from Beijing. On Sunday evening (New York time), China’s National Bureau of Statistics released a slew of data that showed retail sales and industrial production growth in July lagged June’s pace and well below expectations. Since the beginning of the year, fixed assets investments have also missed their target in July. Moreover, while Chinese unemployment may have reached 5.4%, unemployment among 16-24 year olds reached 19.9%, which is an all-time high for China.

China’s Covid-zero policy continues to hamper both internal mobility and economic activity in the world’s second-largest economy. As there are no signs of a change in policy from Beijing due to sustained economic underperformance, the PBOC (People’s Bank of China), China’s central bank, cut its one-year lending facility rate. to 2.75% from 2.85% and its seven-day lending rate from 2.1% to 2%, while adding 2 billion yuan to the banking system through seven-day reverse repo transactions.

While Chinese stock markets were down slightly on Monday, U.S. stock index futures appeared to be trading lower in response to the strengthening U.S. dollar.

As mentioned above, US equities have seen a positive move. The momentum, which had started to slow the previous week, picked up again last week in response to a series of inflation-based data released by the Bureau of Labor Statistics for July. Just days after the same BLS released its July jobs report which was seen as reflecting a strong labor market (at least the establishment survey was. The household survey paints a decisive more negative picture.), Markets braced for July snapshots of consumer (CPI) and producer inflation (PPI).

Much to the (happy) surprise of Wall Street and the general public, on a month-to-month basis, the CPI showed stability starting in June, while the PPI showed an outright contraction. In fact, both headline and core inflation, month-over-month and year-over-year, surprised on the downside.

This served as a catalyst for portfolio managers to add risk during the week. Hope? The bet ? That perhaps policymakers would slow aggressive short-term rate hikes, possibly allowing inverse yield spreads to narrow as the country moves into September and into a more serious phase of quantitative tightening. The place and time for such a pivot would obviously be Jackson Hole, Wyoming later this month at the Kansas City Fed Economic Symposium.

However, before we get carried away, all Fed officials who have spoken out in recent days have sounded more hawkish than accommodating. Fed Governor Christopher Waller, who has been a hawkish lately, will speak publicly later this morning. Wall Street does not seem, at least so far, to accept the story that with inflation falling (really since March) and the economy hitting a series of bumps, the FOMC can stay on its hawkish trajectory.

At last glance, futures markets trading in Chicago are now pricing in a 55% chance that a 50 basis point hike will be made to the target range for the fed funds rate on September 21 and another hike. by 50 basis points on November 2, followed by an increase of 25 basis points in December to increase the FFR from 3.5% to 3.75% at the end of the year.

Monday morning is where the changes to the fed funds rate seem to end. As recently as last (Sunday) evening, futures markets were predicting a series of ups and downs for the first half of 2023.

This line happens to be where potential trendline resistance is likely to be, as relative strength and the daily MACD appear to be extended. 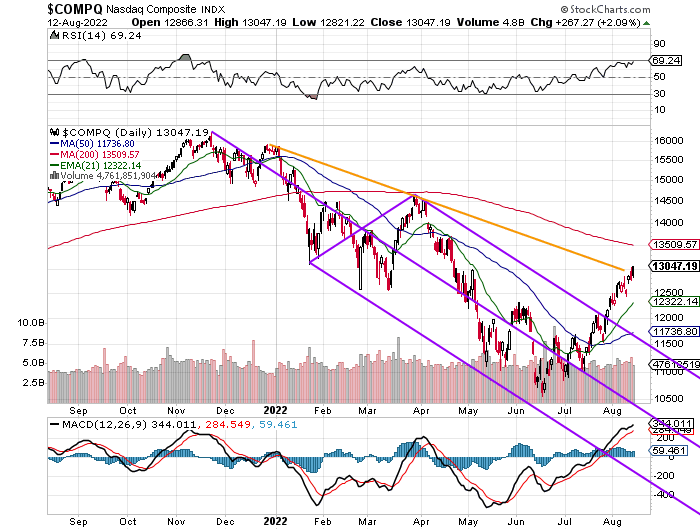 Interestingly, readers will note that while the Nasdaq Composite, like the S&P 500, continues its 200-day SMA, while experiencing relative strength that is nearly overextended, this index has already captured what should have been resistance. of the trend line. 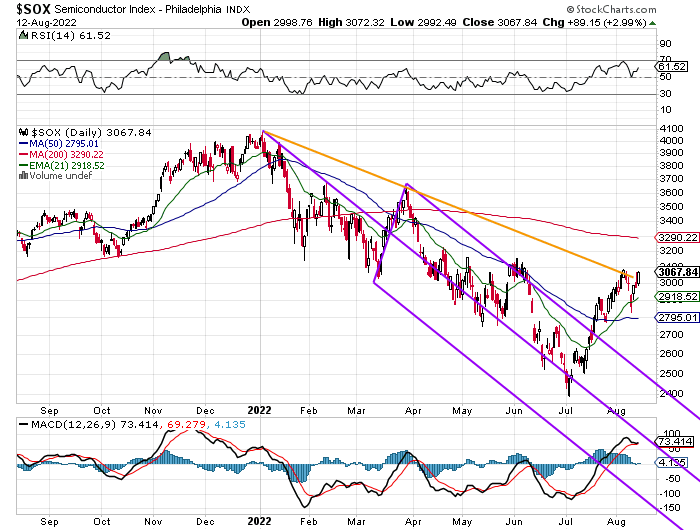 Readers will also note that the Philadelphia Semiconductor Index, which is often (the) driver of the Nasdaq’s broader performance, hit a bump last week, hit trendline resistance and has, at at the moment seemed to pass that test, with plenty of room in its reading for relative strength before hitting what most techs would consider an overbought condition. It’s positive. However, just look at this daily MACD. This indicator tells us, at least for now, to proceed with caution. it’s a flashing yellow light.

Markets could be openly looking for a reason to pull something back on Monday morning and the news out of China, coupled with that negative UK GDP print on Friday, tells a story of a global slowdown. This may be all the algos need to force a sell-off until there is an upward catalyst (or not) from our own “domestic”.

Despite the fact that the earnings season is almost over, this week is going to be quite busy for data interpretation, and thereafter for those of us who live from or in the financial markets. On the earnings front, there are still quite a few headline names, mostly well-known chain retailers that really need to say something positive.

This week, we’ll hear about two sets of rivals… Walmart (WMT) and Target (TGT), both of which are coming off bad quarters, as well as Home Depot (HD) and Lowe’s (LOW). In addition to these four, investors will also see results from the retail comedy troupe known as Kohl’s (KSS) and semiconductor equipment supplier Applied Materials (AMAT).

Beyond earnings, the focus will be on the minutes of the latest Fed meeting, which will be released on Wednesday, as well as a plethora of macro data points. July figures for housing starts, existing home sales, retail sales, industrial production, as well as regional manufacturing surveys for August in New York and Philadelphia are available. The Atlanta Fed will update its GDP Now model for the third quarter (currently growing, yes 2.5% growth) this week, Tuesday and Wednesday.

Question… It’s early days, and right now this model is working on the positive side, but if the economy contracts for a third straight quarter, will someone in Washington call it a “recession”?

Has anyone else noticed the $7.63 billion firm fixed price indefinite modification of an advanced acquisition contract previously awarded Friday by the Department of Defense to Lockheed Martin (LMT)? The news was somewhat expected and was more or less priced in. The modification increases the cap for purchasing aircraft from lot 15 to 129.

Looks like, out of this batch, the US Air Force can expect to receive 49 new F-35s, the US Navy will receive 15, the US Marines will receive 10, non-US DoD participants will receive 36 aircraft and 16 be set aside for foreign military sales. Work will be carried out in Florida, California, UK, Italy and Japan and is expected to be completed by October 2024. 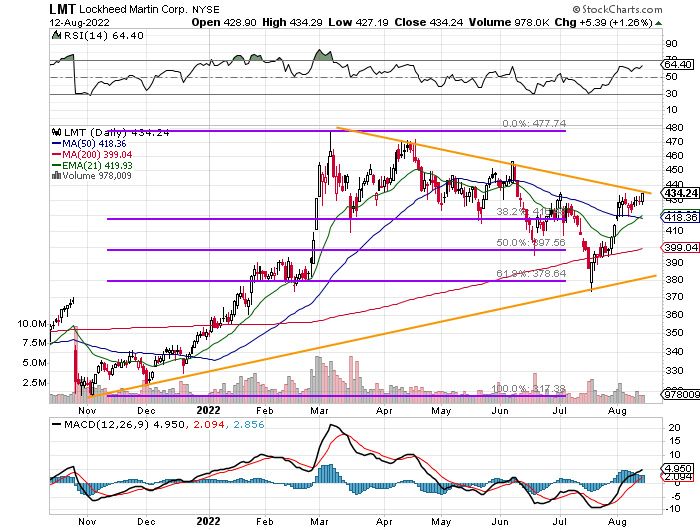 Although this news does not have an immediate impact on the market price of LMT shares, I believe that these shares are preparing for an explosive move. Readers will see that support in July was found at an almost precise 61.8% retracement of the entire November-April rally and that over the entire period covered by this chart, the stock had a series or lower highs as well as a number of higher lows.

Additionally, the stock just experienced an upward cross of the 50-day SMA through the 21-day EMA, which is bullish in the short term. However, at the same time…this 50-day SMA was pushed lower while the stock’s 200-day SMA was pulled higher. Such a crossover, if it occurred, would be considered bearish, confusing the picture. 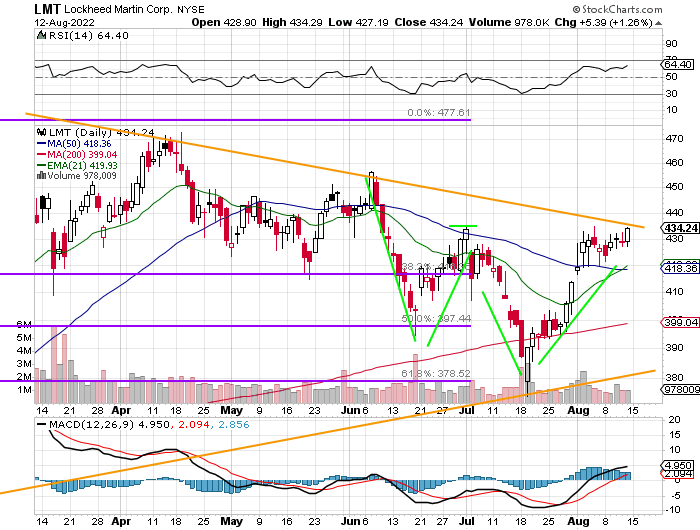 It looks like LMT has created a small but obvious double bottom pattern with a pivot of $434. Oh, look at the last sell-off…$434, which has been strong resistance since late July. Hmm. Do you know what I think? I think if LMT can open that door, that the stock could make a run at much higher prices, I won’t even post a potential target price unless that happens, because my potential target price is semi- wacky. Conversely, if the LMT fails here, a retest of the 200-day SMA becomes likely. I am still the name for a long time.

The Fed (all Eastern times)

(XLE and AMAT are interests in Member Club Action Alerts PLUS. Want to be alerted before AAP buys or sells these stocks? Learn more now.)

Receive an email alert each time I write an article for Real Money. Click “+Follow” next to my signature for this article.